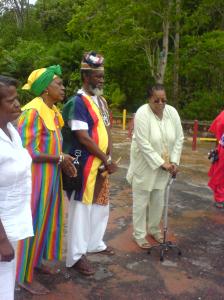 For several years now Orisa devotees in Republic of Trinidad & Tobago have been seeking a dignified manner in which to have ourselves included in the social and spiritual/ religious calendar of festivities in our Nation.

Among the efforts to achieve this end has been the call for SANGO DAY to be recognised as a National Holiday/ bank holiday here in Republic in Trinidad & Tobago.

The National Council of Orisa Elders first responded when the government of the Republic Trinidad & Tobago were soliciting submissions for holiday consideration at the time that Spiritual Baptist/ Shouters Liberation Day and Indian arrival Day were being considered. Some members of the Council gathered at Woodford Square Port of Spain when they learnt that their proffering of a Festival to honour Sango was denied. From that time to the present Egbe Onisin Eledumare have continuously kept up the struggle for such a Day . On many occasions the support was lacking. This however have not deterred the members of Egbe Onisin Eledumare in its attempt to secure the Day as a National public holiday.

The organization have taken its celebrations and commemorations throughout Trinidad. Tobago is yet to be visited in this light by Egbe Onisin Eledumare.

There are forty days to the celebrations. All the support from all shrines, awon kpaale, awon Egbe, awon Ile is welcome and invited.

Shrines wishing to participate can leave their messages of intent on this site.