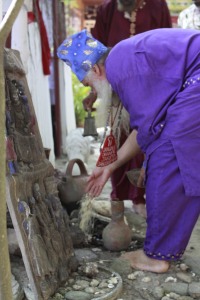 Another year has rolled by. Worldwide states and geopoloties are marking the International Decade for People of African Descent.

There is increasing violence directed towards people of African origin.

Here in the Caribbean, there is uncertainty as to whether Caribbean governments that initiated legal proceedings against the United Kingdom, France and the Netherlands for Reparations will go beyond the initial procedure. In Republic Trinidad & Tobago the National Reparations Committee, is either dormant or worse still nonexistent.

Many are doubtful as to the importance of these celebrations since many believe that Africans played no major or significant role in bringing into legislation The Slavery Abolition Act 1833.

However, the truth is had it been not for the proactive acts of marronage, guerilla warfare,sabotage,poisoning,African spiritual warfare,fires,feigning of sickness there would have been no legislation aimed to abolish slavery.

Today, the battle is ongoing.

Many Africans are still left robbed of their names and continental identities. We have been alienated from our spiritual pathways and practices and economically we are debarred from opportunities on par with other societal members so that we too can register success in our business endeavors and enterprises.

How can we resolve our difficulties?

There are many attempts by various African units to bring relief. These must be commended. However there must be greater efforts to ensure better coordinated and cooperative efforts as the various entities and bodies working in the interest of our race engage the oppressive social and legal constructs that attempt to keep us in servitude.

We have often be warned that food can be used as a weapon against the oppressed and powerless.

WE MUST PLANT OUR OWN FOOD – none genetically modified food grown organically.

Honourable Marcus Mosiah Garvey, cautioned us to be not a beggar race.

WE MUST RECLAIM OUR NAMES.

So as we celebrate, commemorate and observe this year’s Emancipation Day events, let us resolve to strengthen our community bases and organizations wheresoever they already exist, and where they do not now exist let us build organizations that can be effective in materializing the changes that we need. We must take responsibility for our own liberation while holding others accountable for the damages they have done and still do to our communities.