Their Excellencies : Mr. & Mrs. Ademola Onafowokan with Head of the Council of Afrikan Traditional Chiefs at OBATALA FESTIVAL 2011

In what can only be described as a magnificent Festival held at Ita Osa , Ile – Iere , Republic Trinidad & Tobago , orisa devotees came from all over Trinidad & Tobago to celebrate with Ojise Obatala ati Olori Yemoo their Annual Obatala Festival.

The Festival which opened on Saturday 8th. January ,2011 with a WOMAN’S DAY GATHERING and continued with a Childrens’  Day Session climaxed with a grand celebration yesterday that included handing out of AWARDS OF RECOGNITION to Contributors to  Orisa practice and development in Ile – Iere , Republic Trinidad & Tobago. 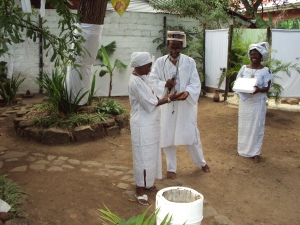 The awardees all received plaques  and were acknowledged for their contributions.

Article to be continued!