JAZZ ATTEMPTS TO RETURN TO ITS ROOTS 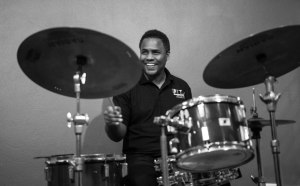 Jazz Alliance of Trinidad & Tobago President  Sean Thomas met recently with members of the Orisa community to present the idea/concept of having jazz come to the kpaale’s of Trinidad & Tobago. Accompanying Sean on this visit was Ruby Boodie, who is an inspiring vehicle of free expression and flow tha impacts on many of Sean’s productions.

Among the groups that were at the meeting  were Ile Iwe Yoruba of Laventille, Egbe Omo Oduduwa Institue of Petit Curucaye , and Egbe Onisin Eledumare of Petit Valley.

The idea met with warm enthusiasm by the members present who are part of a wider body of Orisa organizations that have begun meeting to consolidate a National Sango Day Festivals Committee.

Members of the Working Committe are at work  to host a joint celebration this year with Egbe Onisin Eledumare. The Committee recently met in a collaborative effort to decide the dates and location for the Festival for 2014. 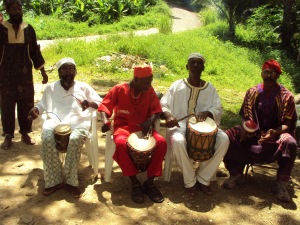 The Festival usually begins with  a ritual at a river location conducted by the women of the community, and different aspects of the celebration are conducted over a seven day period with  a grand climax on the final day. For several years now Egbe Onisin Eledumare have been inviting the wider Orisa community to participate in the event and transform the effort into a National Festival. Last year Otun Iyalode Ifakemi Aworeni Valerie Stephenson Lee Chee now transcended to the Great Beyond called a celebration at Emancipation Heritage Site No.1 at Bon Air West, Lopinot out of which grew the current effort at groups collaborating to make the event National. The process may be long, but it must begin at some point, and the organizations involved have resolved to make the start.The Jazz Alliance of Trinidad &Tobago which has been celebrating  has been celebrating Jazz week  in Republic Trinidad & Tobago for a few years now. It is hoped that this effort will help ground the Jazz tradition  to its roots in African ritual music.

All Orisa organizations are invited to give their support to these efforts to place our sacred traditions in it;s rightful sphere and place.

More updates as we prepare will be forth coming.

4 responses to “JAZZ ATTEMPTS TO RETURN TO ITS ROOTS”